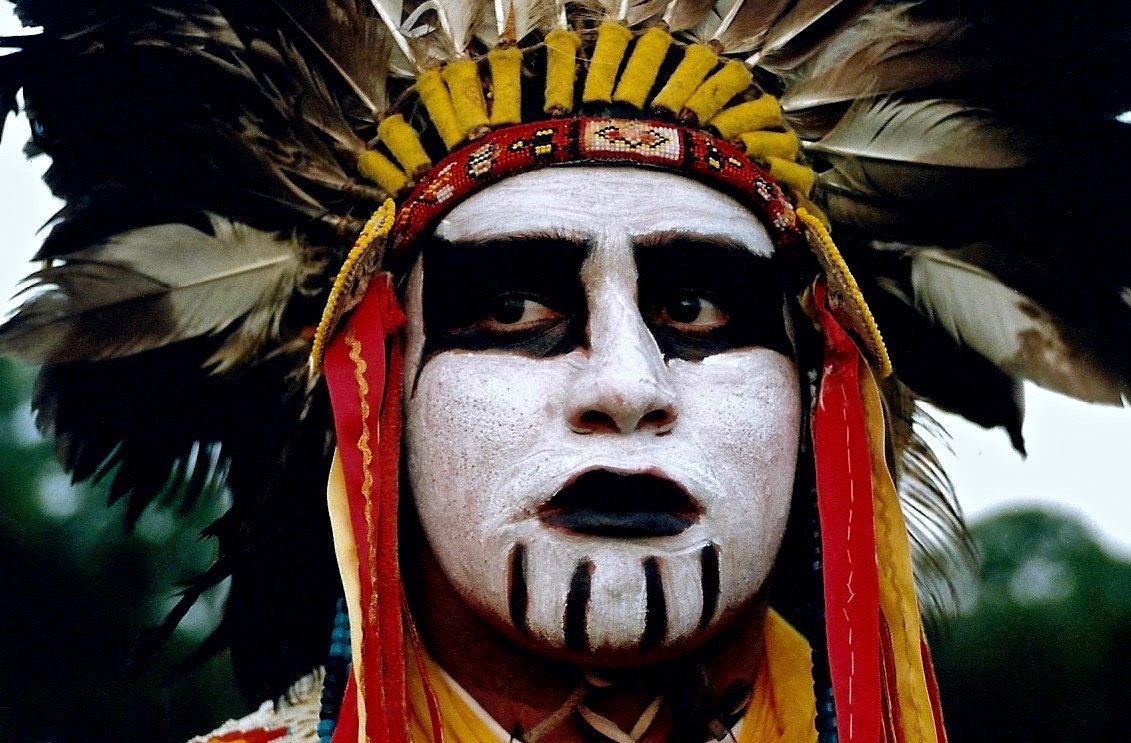 On the counter of Jet Photo in Rapid City, South Dakota in late August, 1995 were five 6 by 4 inch images of Native American powwow dancers that I had shot days earlier at the Crow Fair in southeastern Montana. A local customer  picking up his developed photos glanced down at the images lying on the counter and said “great composition.” I was extremely proud of the recent collaborations with Cedric Walks Over-Ice, Lawrance Archie, Roy Pete, Raymond Cree and Quincy Jackson in creating very powerful and colourful images. After fourteen years working with Lakota-Sioux and Cheyenne Tribal Elders on the Indian Wars Battlefields, this new contemporary area seemed exciting.

When I returned to Sydney, Australia the following week I started to develop ideas about creating a powwow collection at a later date. I was planning to return back to the Great Plains of the USA the following year to sell the last of my books and I planned to attend a series of powwows which would allow me the opportunity to work with traditional powwow dancers. It was indeed an exciting prospect to hopefully capture images much like the ones that I had shot on the last day of the Crow Fair in 1995. It was a tough ask with the natural weather conditions always a major problem with the slow working film cameras although I felt confident about my ability to compose and create quality imagery. By the close of the 1996 summer season I had managed to photograph twenty-six dancers at powwows in three states. I now had fifty-five images that would stand up to the matting and framing process and a potential future exhibition.

When I arrived back in Sydney in early September, 1996 I received a letter from Mary Kennedy McCabe the Director at Exhibits USA a National Division of Mid America Arts Alliance who are located in Kansas City, Missouri. In the letter Mary outlined what was needed at my end for presenting an exhibit for touring North America and Canada by her institution. The mission of Exhibit’s USA is to create access to an array of arts and humanities experiences, nurture the understanding of diverse cultures and art forms, and encourage the expanding depth and breadth of cultural life in local communities. I had been informed that Exhibits USA were very professional and one of the main non for profit companies highlighting and touring artworks around the USA since 1998. 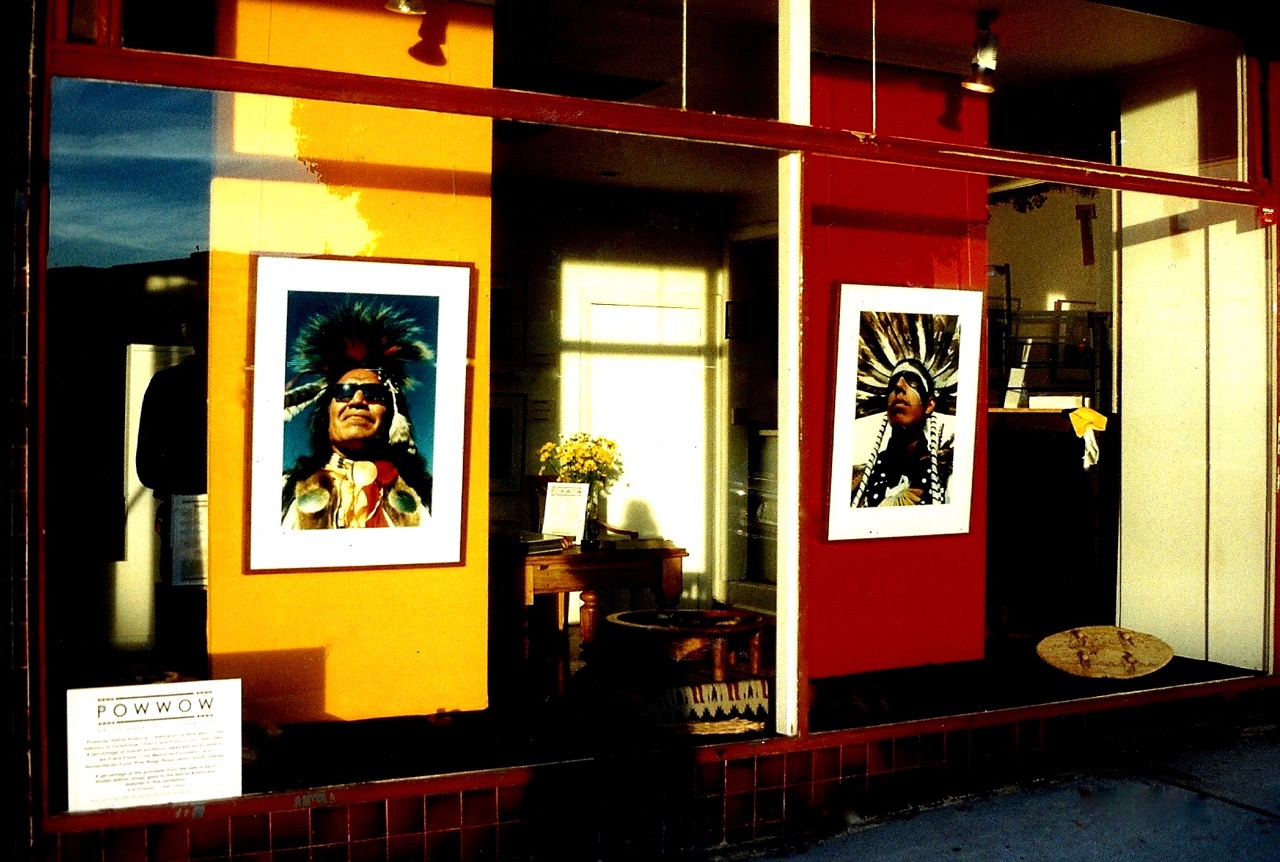 I spoke with Michael Podles the director at Graphis Fine Art Gallery in Woollarha, Sydney, and outlined my future ideas for a powwow exhibit. My previous Native Lands exhibit had shown at the gallery in early October, 1994 and the response by the general public and the media was extremely positive. One of the main media highlights from the Native Lands showing was when the ABC Marketing Group picked eight images from the collection to be viewed at the number one spot on Qantas “Inflight Video” for two weeks nationally across the country. I was indeed tickled pink as one of the images was that of my dear friend Oglala-Brule-Lakota Jack Little. Michael was very positive about my powwow project and he agreed to once again highlight it at his gallery.

With the help of my film technician Carmen Monseratt we set about the difficult task of enlarging the 35mm negatives up to mini poster size prints of eighteen inches by twelve inches. The Powwow: Native American Celebration photographic exhibition was displayed at Graphis Fine Art Gallery in early April, 1997 for a five week period. As yet I had not developed a wall story to accompany the images but that would happen over time if the response to the exhibit was positive from the general public who attended the gallery showing. Powwow was a huge success with the general public in Sydney and it became the number one must see attraction in the month of April, 1997. 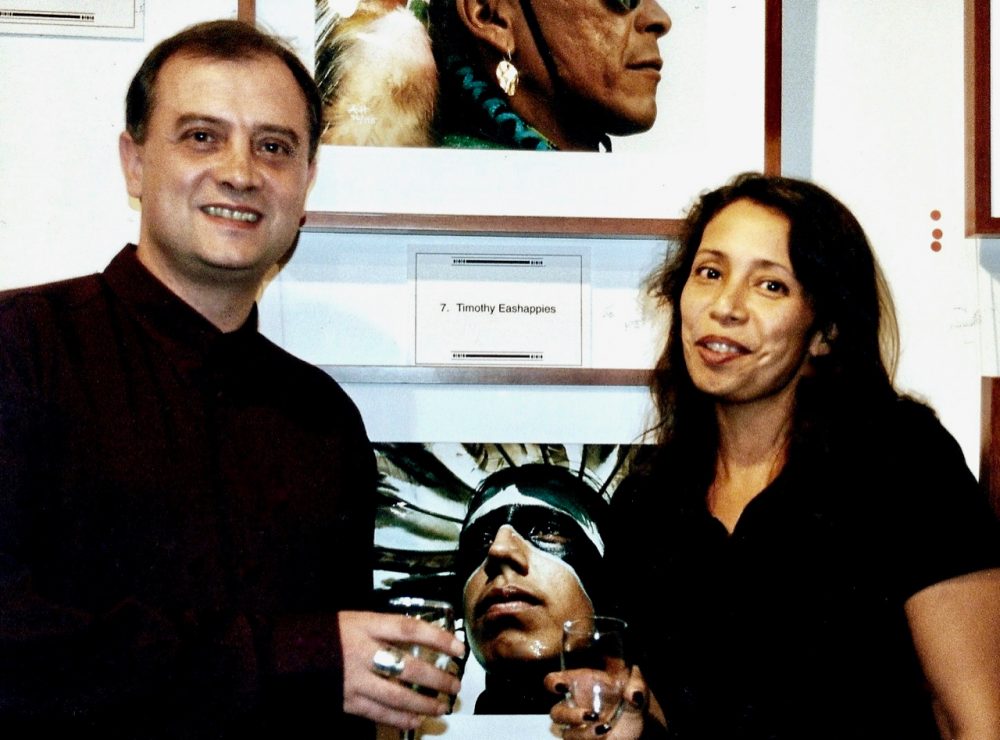 Working with so many different hats and fronting your own media drive is mighty tough on the shoe leather, but the response to the images seemed to inspire people from all walks of life. The exhibit had media press, radio and television eight days out of eleven. Once again, I was over the moon when still images of Powwow closed SBS World News on the Saturday evening after the Tuesday opening. As a artist trying to inspire and educate I could not have wished for more when the production team from Channel Seven Saturday Disney filmed the exhibit for their six hundred thousand young viewers. When the showing of Powwow was done and dusted I then set about the process of putting together my presentation for Exhibits USA.

The package containing the three collections Native Lands, Battlefield’s and the Powwow exhibit slides along with text wall panels were posted out to Exhibits USA at the start of October, 1997. It took over six months but on the twenty-third of April, 1998 I received a fax at Graphis Fine Art Gallery in Woollarha, Sydney from Brian Bach in Kansas City, Missouri informing me that a panel of museum curators and the board at Exhibits USA had selected Powwow: Native American Celebration for a three year National Tour of the United States of America and Canada. I was extremely pleased and proud not just for myself but also for all the traditional powwow dancers who would now have the opportunity to highlight their artistic regalia through the powwow imagery and in the process shine as true individuals in a world where collective clones seemed to be the safer two way bet. 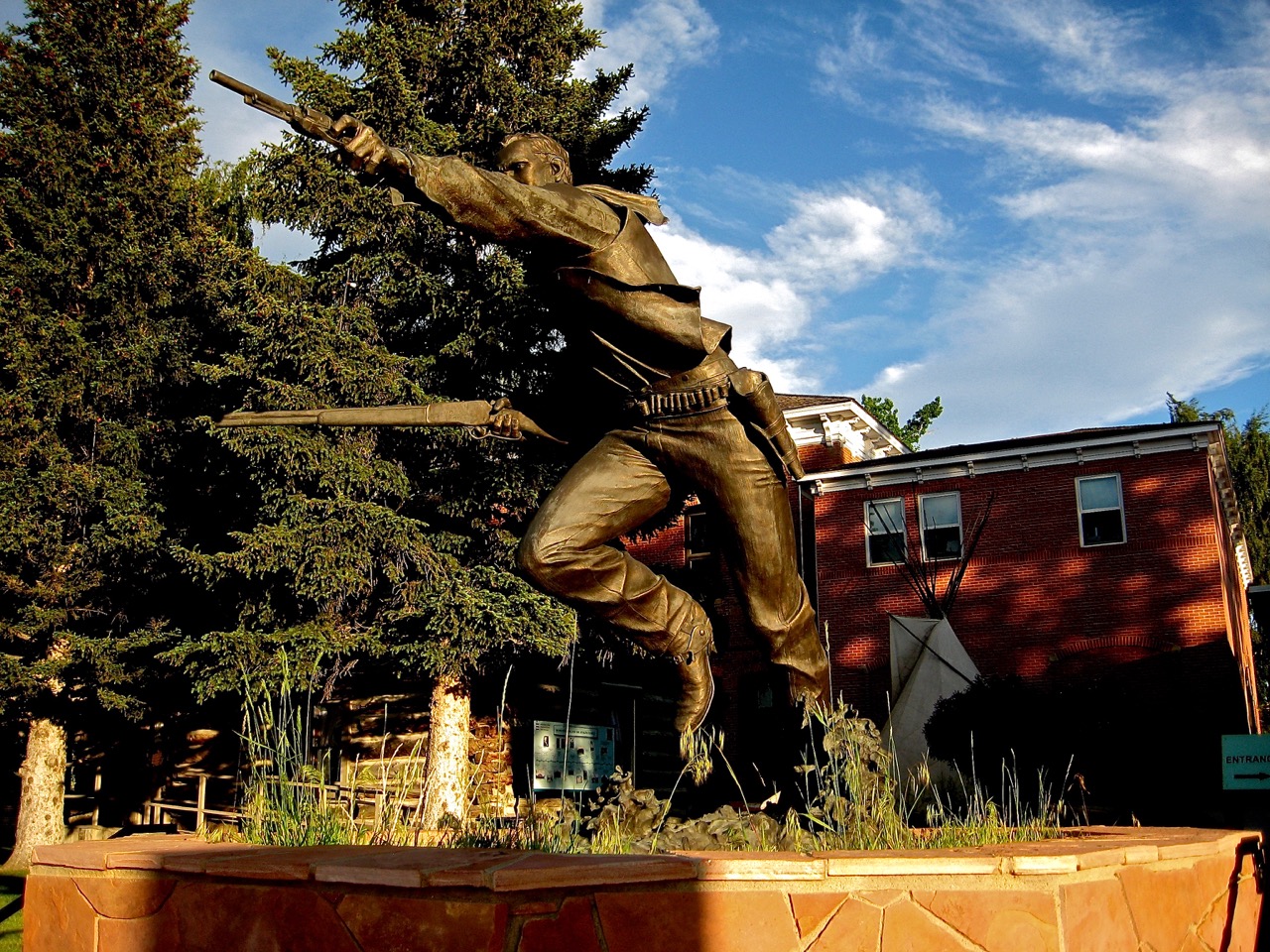 It was indeed a honour that one of my three photographic collections were chosen as one of only fourteen art forms worldwide for a National Tour of the USA. Over the next six months I developed the wall text that would accompany the exhibit and many of the text panels quotations would come from my published booklet “Lakota Spirit” by Jack and Shirley Little. I also applied to the University of Nebraska Press for selected quotations to be included from their publication by Chief Luther Standing Bear from the Lakota Nation. I also used selected quotes from Joe Medicine Crow’s book “In The Heart Of Crow Country” and permission was kindly given by Crown Publishers from New York City.

The Powwow: Native American Celebration exhibit was advertised in the 1998-1999 Exhibits USA Annual catalogue and copies were posted out to over 7,000 museums and galleries across the USA. Forty-three enquiries were made to host the exhibition in only eighteen months of being advertised and the exhibition was fully booked for its three year national tour shortly after this period. On a personal note I was pleased that the opening showing on tour was to be held at the National Civil Rights Museum in Memphis, Tennessee that had been built on the site of the old Lorraine Motel where Doctor Martin Luther King Jr had been murdered in 1968. Other renowned institutions that booked Powwow were the Jim Gatchell Memorial Museum, Buffalo, Wyoming, Clark County Heritage Museum, Henderson, Nevada, the Museum at Warm Springs, Oregon and the Sam Noble Oklahoma Museum of Natural History. I have always been extremely interested in the history of Texas over the years and was pleased that the Sam Houston Memorial Museum at Huntsville, Texas decided to host the Powwow exhibition.

The Powwow idea that started in late August, 1995 at Jet Photo in Rapid City took five years to shoot and develop with five images from the 1999 Crow Fair trip inserted into the final collection. On the twentieth of October, 2000 Powwow: Native American Celebration opened for its five week showing at the National Civil Rights Museum in Memphis, Tennessee and over the next three years it travelled through thirteen states and was shown by sixteen institutions. It was a wonderful journey creating the images for the powwow exhibition and hopefully it inspired and educating interested parties regarding elements of modern-day Native American culture. 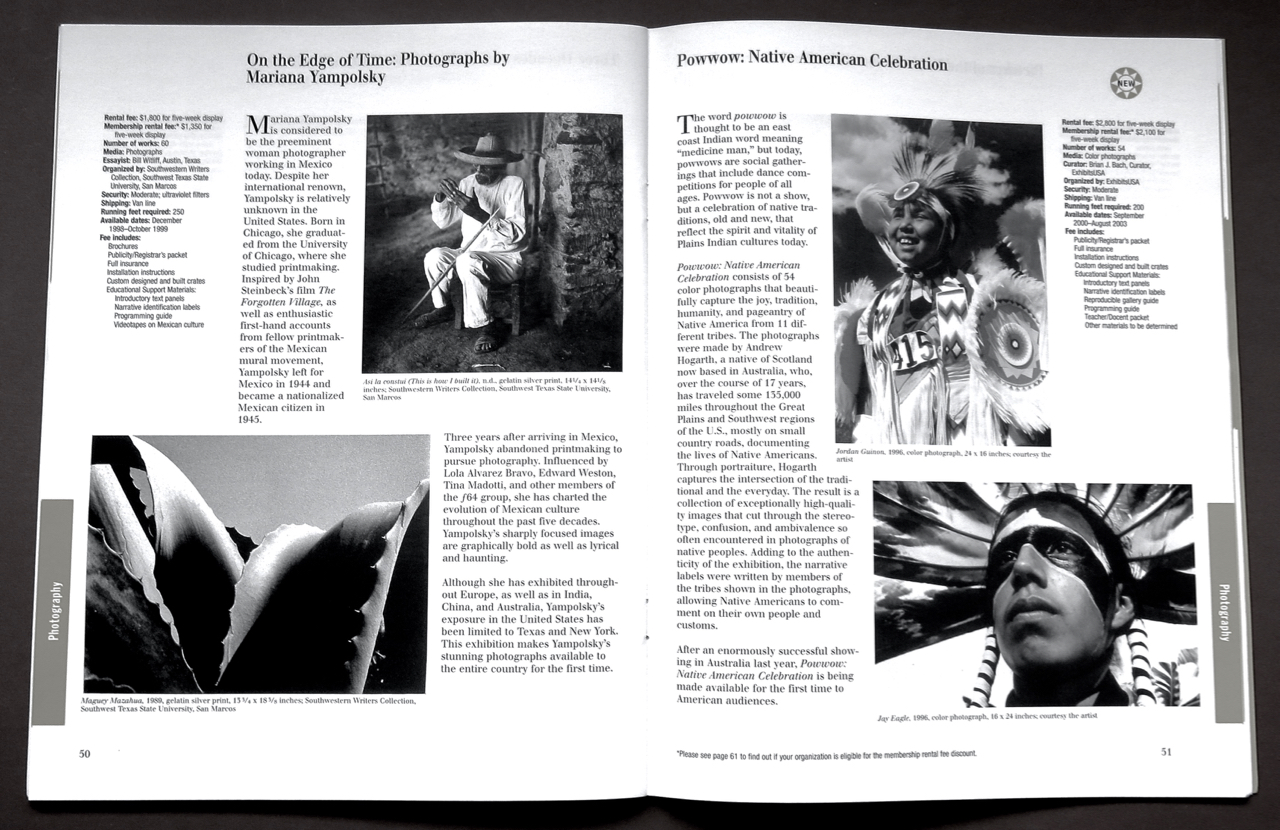 When I received my first annual catalogue from Exhibits USA in late 1998 I quickly scanned the photographic section to see who the other rostered artists also selected for exhibiting. I was staggered to find a group of like-minded individuals who had set aside large chunks of their lives in the pursuit of recording onto film events and places that had important ramifications for inspiring and educating society at large. Listed below are some of these individuals and their touring exhibits.

From the Good Earth: A Celebration of Growing Food Around the World by Michael Ableman.

On the Edge of Time: Photographs by Marianna Yampolsky.

On the Plains by Peter Brown.

Between the Lines: Photographs from the National Vietnam Veterans Memorial Thomas Morrissey.

This Contest is for Real Hands: Rodeo Photographs of the 1930’s by Otho Hartley.

The National Pastime in Black and White: The Negro Baseball Leagues, 1867-1955.

Moving the Fire: The Removal of Indian Nations to Oklahoma.

Travels in the Interior of North America: The Maximilian-Bodmer Expedition. (Paintings). 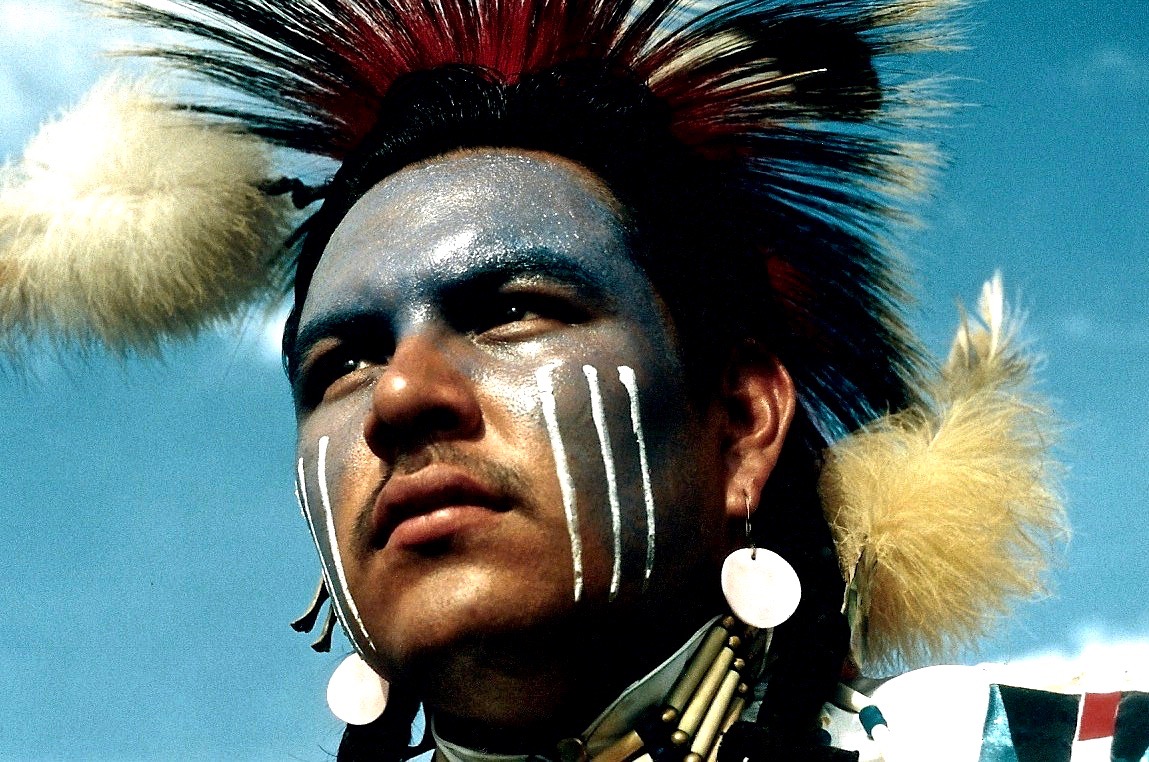 The strengths of Powwow: Native American Celebration are the vivid colours in the photographs, visually interesting as well as technically superb. The support materials also met the needs of the gallery as well as our visitors.

The Jim Gatchell Museum’s observations of Hogarth’s photographs is their appeal to audiences regardless of age, ethnic origin, or nationality. The photographs are an American footnote to frontier history, as it was, what it became, and the subtle speculation in the eyes of the subjects of what tomorrow may be. The attraction of these photographs is the drawing of the viewer into the Native American world. There is a sharing, an understanding, a joining of people transcending conventional cultural boundaries. Hogarth’s photographs communicate and I highly recommend his exhibits to institutions interesting in presenting an honest perception of the American Indian.

The title “Powwow” caught significant attention, and the beautiful photographs. Tribal members here recognised some of these people from the “Powwow Trail.” There was a very positive feedback from the Native American community.

We thought Powwow: Native American Celebration really showed American Indians in a way that we hadn’t seen before. This is an exhibit to teach about our local Indian culture as well as the national culture. Powwows are competitive events where dress and dance styles are judged. They include many tribes and present an opportunity to compare dance techniques, dress and a chance to take pride in Indian culture. They are a large part of American Indian culture that isn’t always seen by the public. For some, this is the first time they have ever seen an Indian dressed up in fancy dress for a powwow. Hogarth really captures contemporary Indians.

The strengths of Powwow: Native American Celebration have to be the photographs and the accompanying text panels. The colour of the photographs was superb, and the subject matter lent itself to being enlarged. They caught your eye quickly and then pulled you into the image, because the image itself was so very powerful as a portrait. Photograph after photograph drew you in to look more closely at the details of each person and image. The text panels gave you incredible insight into what your eyes had introduced you to at first glance. They were very informative and frank about our Native American population and their lives today. Both aspects make a very powerful experience for the viewer.

Excellent photographs. One of the finest-strongest exhibits.

Powwow: Native American Celebration is one of our most popular exhibits. It’s been all over the southwest and it has drawn over 75,000 visitors to its sixteen museum and art gallery showings.” The exhibit takes an educational approach with interactive objects. Visitors learn there are 557 federally recognised nations, or tribes, in the United States. Through the powwow, American Indians honour the traditions of their ancestors and pay tribute to the people of tribes today. 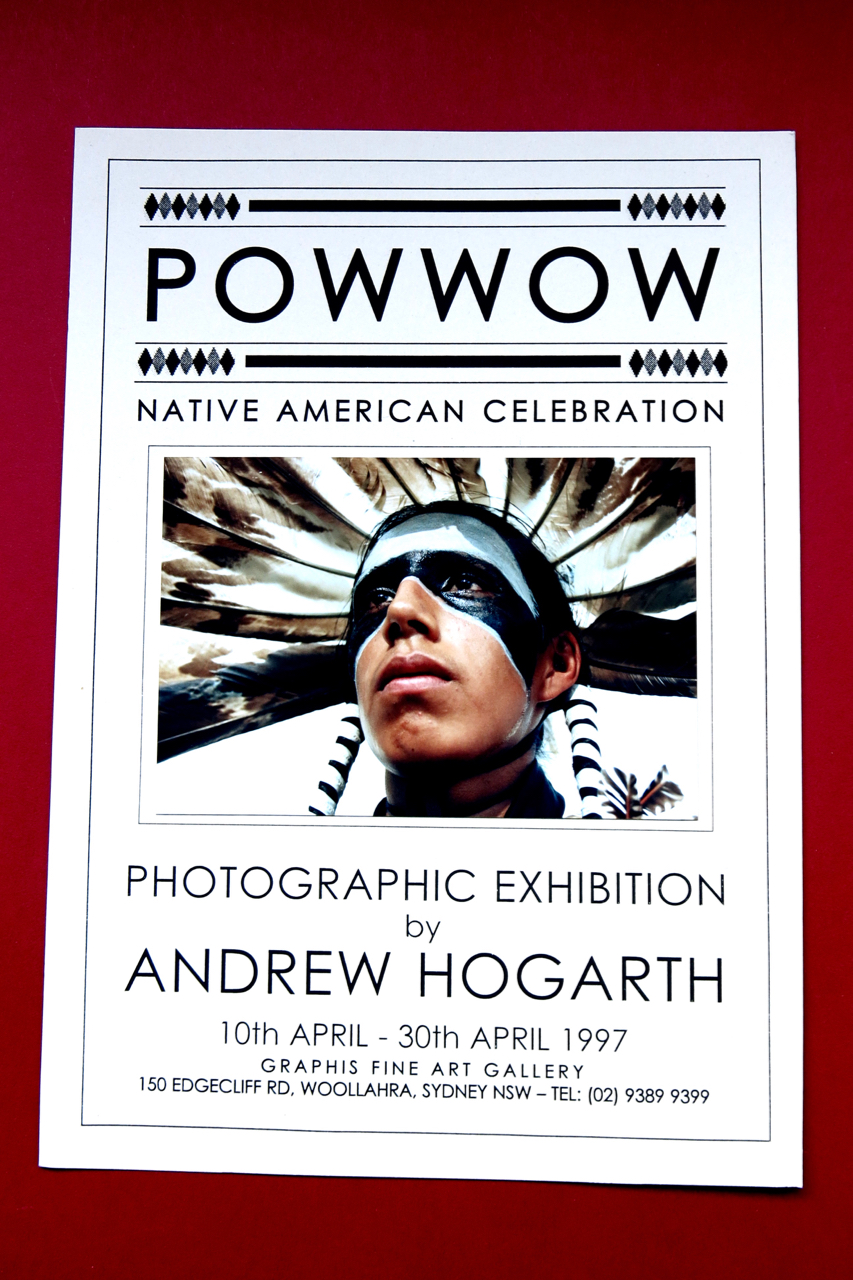