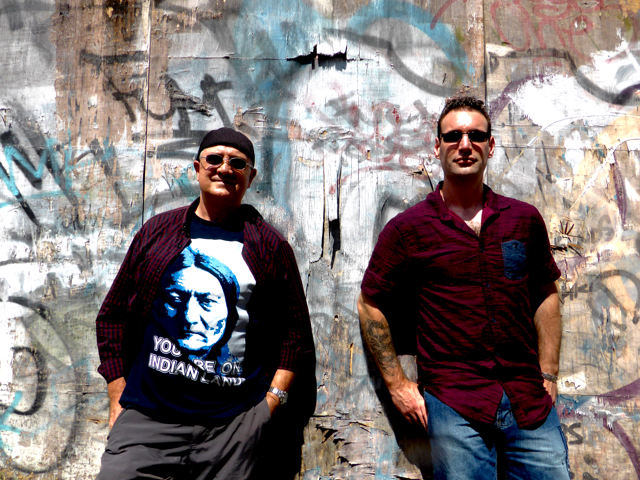 After Chris and I completed our promotional photographic shoot with artist Jen Gifford in late January we had the opportunity to chat about the two news songs that will be released to celebrate the fifteenth anniversary of the “Great Plains” album later this year.

The lyrics written for “Coyote Man” will speak to the listener about the life journey of my dear friend Lakota Jack Little from his birth in 1920 till his death in 1985. Jack was one of the last Lakota to be born in a tepee on the Rosebud Reservation in western South Dakota. Crazy Cat a tribal elder walked through a snowstorm to give Jack his baby name “Hahu” in the old traditions of the tribe soon after Jack’s birth. Chris said that “Coyote Man” will be a majestic and uplifting song, and a fitting tribute to the man it is about. Chris will be using an alternate tuning on the guitar so the song will have a unique, almost mandolinish quality to the sound.

And the second song “Buffalo Medicine Horns” will deal with aspects of the mystical world of the Minniconjou-Lakota tribe from the Powder River region in southeastern Montana in the early 1870’s. This period was before the onset of reservation life took hold soon after the Battle of the Little Bighorn in 1876. The lyrics for this track have been written with contemporary themes and they rely heavily on the oral stories told to me during my recent travels across the Great Plains. Chris said that this track will be a bluesy, gritty song. And he plans to use some slide guitar to create a rocky, swamp blues feel. It is indeed exciting times ahead for the “Great Plains” album.

The new “Great Plains Facebook Page” is now completed with stories and images about the creation of the album and the page also highlights stories regarding the people I met along the way. Images and stories from my “Battlefields, Monuments and Markers: A Guide to Native American-United States Army Engagements 1854-1890 book and quotations from “Lakota Spirit: The Life and Times of Jack Little 1920-1985 are also included throughout the pages posts.